A Short introduction on How to Practice Tai Chi for Health (MSNBC - video: 2:19) Dr. Shin Lin of University of California Irvine discusses how to practice Tai Chi in this short (2:19) introductory video.

Overview of Best Practices in Tai Chi. Dr. Yang Yang describes the benefits of Tai Chi, best practices, and the foundation of Qigong that is required for Tai Chi practice.

Plateaus In Learning Taiji. When people begin learning something new, they often learn quickly. Their minds become engaged in the learning. However, when learning taiji, learning quickly is not necessarily better than learning slowly and deeply. Taiji has many subtle details that take time to learn. It takes time for it to get into your body and your mind. With each lesson, it is important to practice regularly until that lesson becomes part of you.

Sinking the Qi. Sinking the qi is a common term in taiji, but many people find it very confusing. Sinking the qi simply refers to using your breath to help relax and calm the mind and body. A big part of sinking is developing "soong", or relax and loosen; and jing or mental quietness, in your practice.

Different speeds produce different effects for learning. At fast speeds one can appreciate the momentum of swinging and turning as well as experience the force of strikes, but it is too fast to attend to details and subtleties. Medium speed is perhaps a balance between learning momentum and balance, but still does not provide the detailed attention necessary for exploring nuances of movement. Slanted Flying, Journal of Tai Chi Chuan. Read Article.

Biomechanical Analysis of Arm Manipulation in Tai Chi. This clinical case presentation explores the elusive nature and the ever-changing face of chronic pain and some of the components of an integrative approach to manage and relieve the suffering that so often accompanies chronic pain. PMCID: PMC9232327. 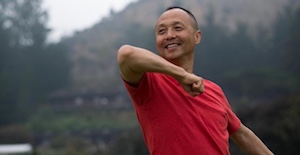 Is your practice focused on health, or martial art? This is both a common and a legitimate question. More.

How to Relax in Tai Chi. A short video by Bruce Frantzis on relaxation, a fundamental concept of Tai Chi.

Bruce Frantzis: "In The Insider’s Guide to Tai Chi I hope to provide you a practical understanding of what tai chi is, what makes it work so well, and how to choose a style, teacher and practice regimen. I created this report and have given it away because I believe that it contains essential information that will be useful on your tai chi journey, whether you end up studying with me or another teacher."

Tai Chi for Back Pain. In this short video on back pain, Bruce Frantzis explains how he used Tai Chi to help his own back recover. He offers several ideas on how Tai Chi can be used with anyone that has back pain.

Tai Chi for Martial Arts. Tai Chi Master Bruce Frantzis discusses what it takes to learn Tai Chi as a martial art. Includes a short video.rney, whether you end up studying with me or another teacher."

How to practice Tai Chi in a safe and yet profound way? Here is the secret -- but not really because it has been mentioned again and again by teachers. The funny thing is that many of the instructors don't do it correctly either. Here is the how-to.

A brilliant introduction to the fundamentals of Tai Chi for beginners to expert practitioners.

From the author Paul Cavel: “I have encountered too many practitioners who have put in immense effort, some over many years, in great earnest, yet their forms cannot really be considered internal. Maybe they trained a weak system, did not have a teacher who could perform or communicate internal techniques that are virtually invisible to the untrained eye, or they did not spend enough time on component practices. Whatever the case, this situation is incredibly unfortunate, and, with my book, my aim is to show you how to develop quality and depth in the fundamentals, which not only unlock health and power-generating benefits but also more advanced and extraordinary levels of practice”.

The Tai Chi Space: How to Move in Tai Chi and Qi Gong

The ability to have a wide field of visual awareness, without becoming distracted, is something that needs practice. Peripheral vision is what we can see "at a glance," or everything we see that we are not looking at directly. Peripheral vision is about movement and process, and it is involved with deteting and understanding the big picture -- the context and changes in our environment. More... 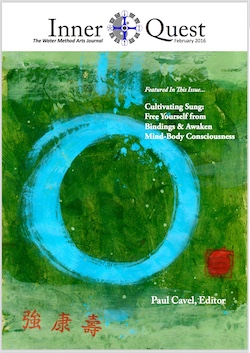 The Chinese term sung is often translated as "relaxed", but this is a gross oversimplification of the actual state being described. A more accurate translation is "unbound", a state in which the body loses all unnecessary bindings, all resistances, all tension.

Understanding the concept intellectually is a good start, but the aim of Water method arts is direct experience: that is to go beyond any mental construct and practice for the sake of embodiment. The ancient Chinese spent hundreds, even thousands of years  tinkering with the internal arts to offer pragmatic steps for integrating fundamental principles in their  flesh, qi-energy, and minds—in the totality of their being.

Without sung, strong circulation of blood and qi throughout the body cannot be achieved, so there can be no  flow. Balanced qi  flow is what brings into harmony the body and mind, making lasting, vibrant health a living reality.

How to Cultivate and Integrate Yi, Qi and Jing. Dr. Paul Lam.

Zhan Zhuang - The Hidden Essential of Tai Chi Training. The Art and practice of Tai Chi is built upon fundamenal principles of Qigong that can be learned through the practice of standing meditation, also referred to as Zhan Zhuang (“jan jong”), Wuji Qigong, or (sometimes) Primordial Qigong. There are thousands of different types of Qigong. Arguably the most popular type of Qigong for martial arts is Zhan Zhuang. This is also known as “stake standing”. The practitioner stands motionless in a particular posture to develop internal strength. Zhan Zhuang is very easy to practice yet is said to be difficult to master.

Standing Qigong practice develops integrated, relaxed body/mind awareness and focus, called “soong” in Chinese. Some masters train only using this form of Qigong. As Author Mark Cohen explains, "Whether we practice Tai Chi for health or martial arts, the inclusion of Zhan Zhuang (Standing Meditation) at the beginning of our daily training session becomes essential if we are to gain many of the greatest benefits spoken of in the Tai Chi Classics and historical anecdotes. For health, Zhan Zhuang training initiates the body’s internal healing, strengthening, unification and enhanced Qi flow which is then amplified by proper Tai Chi practice. In this case Zhan Zhuang becomes the Yin to Tai Chi’s Yang. While Tai Chi is often thought of in terms of ‘stillness within movement,’ Zhan Zhuang may be considered as ‘movement within stillness.’ Simply put, they are a perfect compliment to one another."

INSIDE ZHAN ZHUANG The Nuts and Bolts of Standing Meditation. Mark Cohen. Part 1a.

INSIDE ZHAN ZHUANG The Nuts and Bolts of Standing Meditation. Mark Cohen. Part 1b.

Secrets of the Pelvis for Martial Arts: A Practical Guide for Improving Your Wujifa, Taiji, Xingyi, Bagua and Everyday Life. Many martial arts and Qigong practices speak of the need to move from the center, to 'round the crotch', to open the Huiyin point, and to relax the waist and hips. Due to the "private" nature of this area of the body, there are few if any martial art teachers who publicly describe methods regarding how to achieve these results. And so the pelvic area (a.k.a. dan-tian or hara) remains the most difficult area of the body for many practitioners to understand, feel, relax, and open. This is the first and only book dedicated to the topic of developing the pelvic area for the martial arts.

Zhan Zhuang Journal. This is the only collection of standing meditation, zhan zhuang Qigong training journal notes to be made freely available anywhere! Nearly 150 entries spanning over fifteen years!

"From time to time, we may hear people complain that practicing Tai Chi (Taiji) chuan makes their knees hurt. This is ironic since Tai Chi is supposed to help people with various health issues, including knee problems, to be better. Grandmaster Chen Zhenglei addressed this topic during a public speech in Toronto, Canada on June 18, 2017." Posted on July 18, 2017 by violet.li@tadi.com.

Tai Chi How to: Avoid the Deadliest Tai Chi Exercise for the Knees! 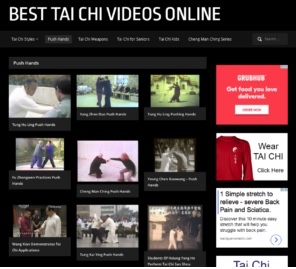 How to get the best from your Tai Chi

The most obvious advice is….practice. No practice, no improvement. Simple as that. More.

Fall Prevention: Why Every Aging Adult Should Learn Tai Chi 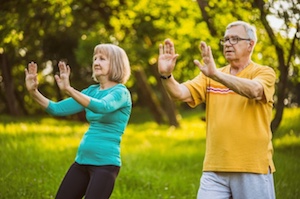 Tai Chi Principle #1 – Elevate the Crown and Lift the Spirit

Tai Chi Principle #1: Elevate the crown and lift the spirit. This means that the head should be upright so the Shen or (spirit) can reach the top of your head. We don’t use Li (force), or the neck will be too stiff and the chi (breath) and blood cannot flow through to the head. (always remember that stiffness is the discipline of death) The feeling in your body should be light, buoyant, and natural .

Excerpt from article by Julie Paler: Interesting new fact: Science is now discovering that our brain has a system of lymphatic vessels located in the dura mater, the covering of the brain. The major arteries and veins that are within the dura mater contain a lymphatic system that the brain uses together with the Immune system to get rid of waste from the head. (see video below). This is essentially Drain Pipes in Our Brains. Unfortunately, so many people have bad posture, a...See More

Tai Chi and Its Effect on the Body’s Lymphatic System 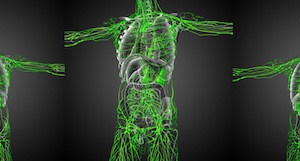 "Tai Chi Chuan movements, when done correctly, will act as a tool to help manually flush the body’s lymph system.  This doesn’t just happen by chance. These movements were intelligently designed to work with the three largest cluster of lymph nodes in the human body: 1) the Armpit (Heart-1 Ji Quan), shoulder nest area axillary fold (Lung -1 Zhong Fu), 2) the Groin (kua, stomach-30 Qi Chong), and 3) the Back of the Knees (Bladder-40 Wei Zhong).

The lymphatic system plays a vital supporting role to both our Cardiovascular and Immune systems.  They are responsible for keeping our blood volume levels where they need to be. They keep you from collapsing from low blood pressure. And they also prevent you from getting infections." More.... 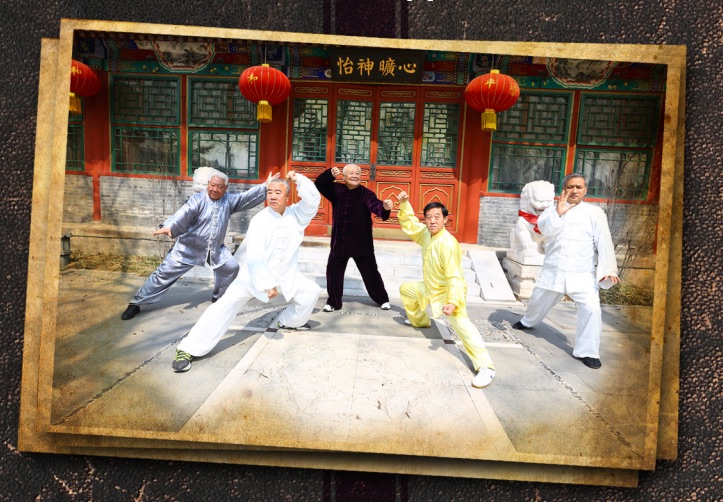 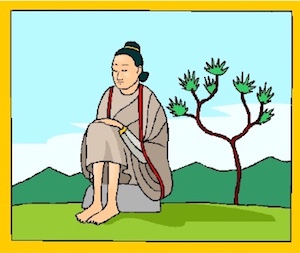 If you are overwhelmed with the intricacies of tai chi then this topic is going to be refreshing for you.  For the ultra-beginners, tai chi breathing is one area that you don’t need to focus too much on.  Your job is to learn the movements of the form.  Breathing will improve just from learning the form and practicing. Once you complete the form and have been practicing for a while, questions always arise as to how you should breathe, when you should breathe, if you should breathe… More.